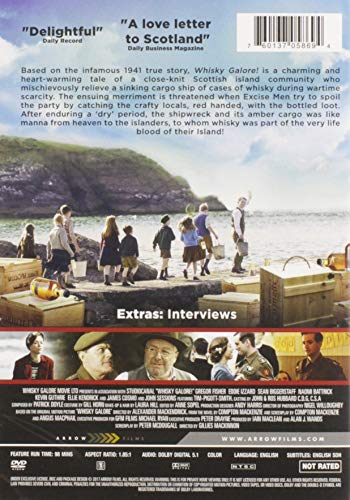 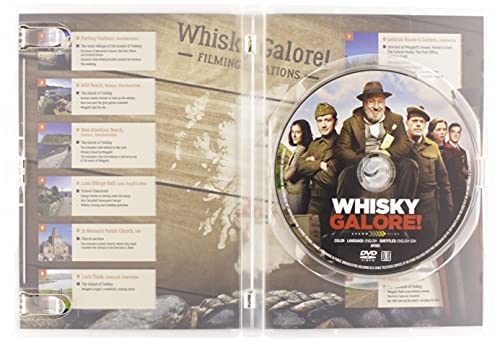 Whisky Galore! is the charming and heart-warming tale of a community of Islanders on a remote Scottish Island during WW2 coming together to relieve a sinking ship of its amber cargo.
Based on the true story of the cargo ship SS Politician running aground off the coast of Eriskay in 1941 and the ensuing battle between the Excise Men and the locals trying to salvage the lucrative cargo, that of 50,000 cases of Whiskey . The shipwreck and its cargo was like manna from heaven to the Islanders, whose island was totally ‘dry’, without any type of alcohol, which some would say is part of the life blood of the Scottish Islands!
Eddie Izzard, Gregor Fisher, Sean Biggerstaff, James Cosmo, Ellie Kendrick, Kevin Guthrie and Naomi Battrick stars in this charming remake of the Ealing classic!
Product Dimensions ‏ : ‎ 0.7 x 7.5 x 5.4 inches; 2.72 Ounces
Director ‏ : ‎ Gillies MacKinnon
Media Format ‏ : ‎ Anamorphic, NTSC, Surround Sound, Widescreen
Run time ‏ : ‎ 1 hour and 38 minutes
Release date ‏ : ‎ December 12, 2017
Actors ‏ : ‎ Eddie Izzard, Gregor Fisher, Ellie Kendrick, Sean Biggerstaff, James Cosmo
Studio ‏ : ‎ Arrow Films
ASIN ‏ : ‎ B075QV9R2P
Country of Origin ‏ : ‎ USA
Number of discs ‏ : ‎ 1

Added to wishlistRemoved from wishlist 0
$37.99
CHOOSE YOUR PRODUCT CATEGORY:
ABOUT 24 LIQUOR STORE